Dr Shisong Jiang recieved an invitation to the annual Royal Garden Party to recognise many years’ service to charity.

On Wednesday 18 May, the Dr Shisong Jiang, the founder and CSO of Oxford Vacmedix, was invited to Buckingham Palace in London for the Royal Garden Party, an annual event that invites a broad range of people – all of whom have made a positive impact in their community – to be recognised and rewarded for their contributions to public service.

Alongside his pioneering research work in oncology Shisong has been a director of Barry & Martin’s Trust, for many years. The Trust is a charity that champions HIV-related causes and organises the exchange of doctors and nurses between UK and China both to provide and to support the medical treatment of HIV/AIDS patients in remote regions of China. The Trust was originally established by Martin Gordon over 20 years ago with support from Shisong to set up the connections with Chinese national and provincial level medical administrations and hospitals. It was the first organisation to bring knowledge of medical treatment/management for HIV/AIDS to China. The Trust also helps children throughout their childhood, orphaned as a result of AIDS. 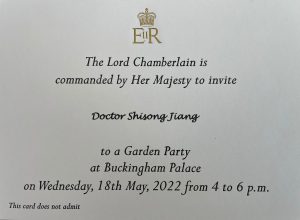 Spun out from the University of Oxford, Oxford Vacmedix (OVM) is commercialising the research on Recombinant Overlapping Peptides (ROPs) developed initially by Shisong Jiang at the Universities of Harvard and Oxford. The principal application of the ROP platform technology is the development of novel therapeutic cancer vaccines with the potential for increased efficacy, simpler regulatory pathways and lower costs. The platform also has further applications as therapy/prophylaxis in infectious diseases and as diagnostics. OVM’s lead cancer vaccine, OVM-200 which targets survivin, is in a Phase 1 clinical trial in the UK for solid tumours.

“This invitation to a Royal Garden Party recognises Shisong’s major contribution to the charity and is very well deserved. Shisong is one of the leading translational scientists in the Department of Oncology at Oxford. His research has led to OVM’s cancer vaccines reaching the clinic and also in diagnostic tests for Tuberculosis and Anti-Microbial resistance being used in clinical trials. We look forward to seeing the benefits these products can bring as therapies and diagnostics in cancer and infectious disease”.

For more information or to arrange an interview, please contact:

Oxford Vacmedix UK Ltd, based on the Oxford Science Park, UK, is a clinical stage bio-pharma company that utilizes the novel proprietary platform technology of recombinant overlapping peptides (ROPs) invented by Dr Shisong Jiang. ROPs have been validated as a technology to stimulate broad and strong T cell immunity therefore forming a good platform for cancer therapeutic vaccines and diagnostics. The company is a spin-out of the University of Oxford and has strong partnerships including collaboration in China with Changzhou Bioscience that has licensed the ROP platform to develop diagnostics in both cancer and infectious disease.